Does anyone have experience of Nematode infestation in llamas?

Dear Chris,
By nematode infection I presume you mean the normal 'worms'. We worm our llamas as required -either routinely or as a result of worm egg counts.
Through experience I have found that some new mothers are very susceptable to increased worm infestation following giving birth-usually about two weeks later, they will develop loose droppings and have high worm egg counts when the rest of the herd do not. Again from experience after worming routinely with noromectin (ivermectin based injectable wormer) we have also found that some llama worms are resistant to ivermectin based wormers and by far the best wormer for llamas appears to be Panacur given orally (yes I know -very difficult in an animal that spits!) at the correct dose per weight of llama over a three day period (this was recommended by our vet). We graze our llamas with sheep, and apparently some sheep worms are transferable to llamas and one needs to be extra vigilant in keeping an eye on the worm status of the llamas. Hope this helps,
Sarah 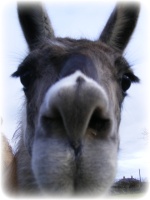 Similar topics
» Tell me about llamas....(and is their poop good for composting?)
» beneficial nematodes
» How do I get rid of nematodes?
» Root Knot Nematodes - PROGRESS!
» EARWIGS!!!!